This article will guide you on how you can manipulate IP Addresses and routes using the Command Line on Debian-based Linux Distributions, especially on systems without and Graphical User Interface. The standard commands used to manage network configurations on almost every Linux system are: ifconfig, ip and route. While this commands are used to change network settings on-fly, with instant effect over network interfaces, their modifications are not permanent and can’t survive after a system reboot or an interface reset. In order to make the network settings permanent you must manually edit the interfaces file /etc/network/interfaces and use the static method on the interface you want to assign a static IP Address.

In order to temporary and instantly change network settings (IP, Netmask, Gateway) first you must issue one of the following commands to get a list of all your network interfaces:

From this commands output you can easily spot the relevant information about every NIC, such as the name of the network card and their state, if they are actually active or down. As you can see eth0 interface is down which is explicitly shown by the ip command. The missing inet addr value on eth0 ifconfig command output suggest that this interface is also inactive.

ifconfig command is a powerful network utility belonging to net-tools package which allows to assign or change IP addresses on fly, or even create an virtual network interface instantly. In order to add IP settings with ifconfig command use the following synax:

To create a Vitual Network Interface or an Alias Interface use the following syntax: 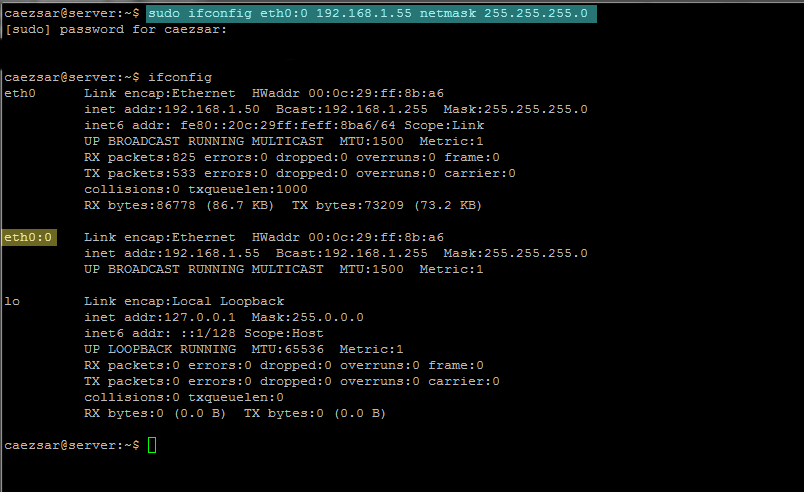 After the gateway has been added issue the following commands to list the kernel IP routing table:

To add a route to a specific network only use the following command syntax example:

To delete a route issue the following command:

IP Command is a new and powerful network command which includes several network utilities within and tends to replace the old and deprecated ifconfig command.

In order to create a virtual network interface and assign an IP address the same time with IP command issue the next syntax:

To delete the address along with the virtual network interface run the following IP syntax:

To get a list of the Kernel routing table using IP command issue the following syntax:

To add a default gateway use the following example syntax:

To replace a default gateway:

To add a gateway to a specific network use the following syntax:

To delete a default gateway or a specific gateway to a destination network issue the below commands:

To delete IP settings over an network interface issue the following command:

If you want to disable a network card on-fly and keep the previous setting when you will enable it again run the below command:

To activate the same interface with its previous settings run the same command, but replace down statement with up:

To disable a network interface and delete all previous configurations made with ip or ifconfig network utilities issue the following command:

To enable it again with its permanent settings then issue the next command:

One of the most powerful abilities of Linux systems stands on kernel capabilities to move packages from one interface to another or forward them between networks, in other words to route traffic and act as a router. To achieve this goal your machine must own at least two network interfaces connected on two different networks and the kernel IP Forwarding function activated.

IP Forwarding is disabled by default on all Debian based distributions. To check the status of this function issue the following commands:

If the returned value of this commands is 0 then your system doesn’t act as a router. 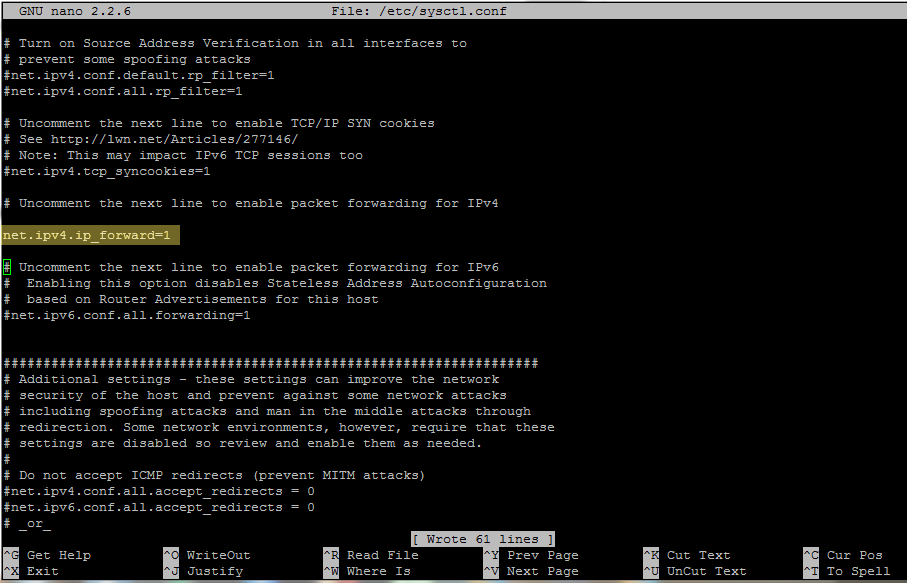 This are just a few network settings that you can tamper with from command line, especially on servers, settings which take place instantly without the need to reboot the system or modify important network files on your machine.You don’t have to worry in case you are misconfiguring network settings by using this commands because their changes are not permanent and you can always revert changes by issuing sudo ifdown ethX && sudo ifup ethX commands or reboot the system, but pay extra attention on running this types of commands remotely and the only way you can access your server is through SSH protocol.

How to Install Discourse on Debian 9-10 and Configuration SMTP