Apache is one of the most widely spread Open Source web server for web hosting in Internet due to its stability, robustness and rich variety of modules and features. Due to its popularity, Apache comes with pre-build binary packages for almost all major Linux distributions and can also be installed on other Operating Systems such as Unix, Windows, Mac OSX, BSD etc.

However, a basic installation of Apache on Linux systems, by default, doesn’t offer a full protection against attackers, so a few security measures must be taken in order to protect your machines, web servers and web documents against such types of malicious attacks.

This article will provide you a few tips on how you can secure and protect Apache Web Server installed on Debian-based Linux distributions.

How to Assign IP Addresses On-Fly on Debian Based Linux…

How to make permanent DNS changes to resolv.conf file on…

Before starting to enumerate and use the security tips, first we need to run a few commands in order to get an inside on how Apache software is compiled and works on the system, what version of the server with what modules are installed and what modules and Virtual Hosts are actively.

In order to get Apache short version run the following command:

For an exhaustive view of Apache build-in options run the following command: 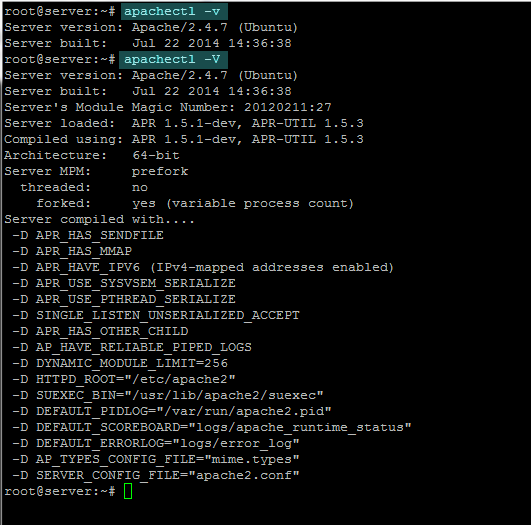 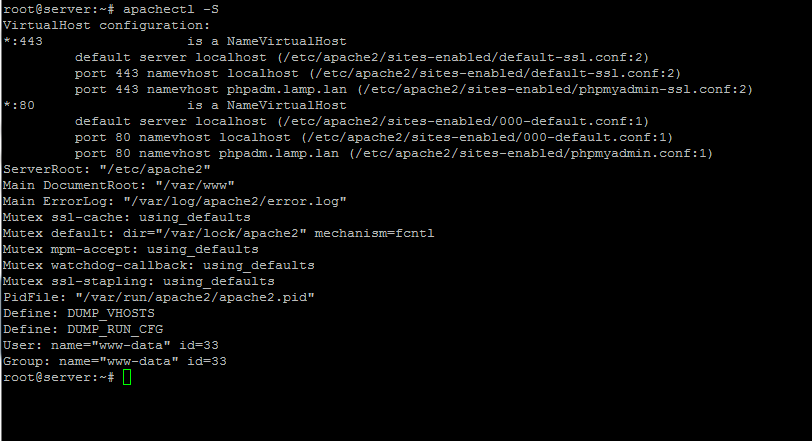 To view all the Apache loaded modules at runtime issue the following command: 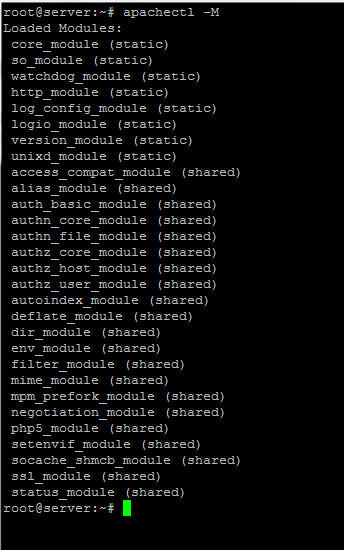 To disable an Apache activated module issue the following command:

Armed with all this knowledge about how Apache is build and runs on your system, it’s time to proceed with software enforcement by covering the following tips best suited for your environment.

By default, whenever a HTTP request comes to Apache by whatever methods, the web server automatically displays its installed Version and the Operating System name as illustrated in the below screenshot, making it more easily for attackers to exploit server and system vulnerabilities known for that specifically version number.

In order to hide this type of information for outside request, open Apache security.conf file and change the ServerSignature statement from On to Off and, also, change the ServerTokens statement to Prod. Use the below screenshot as a guide. 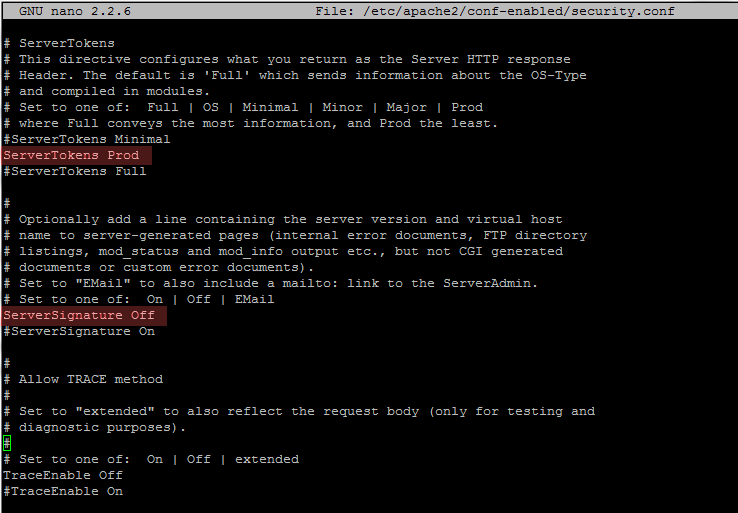 After you have made all the above changes, restart Apache daemon to reflect changes and use a browser to test the configuration by directing it to a URL non-existent path at your server’s IP Address or domain, such as http://server-ip/test (where the test resource doesn’t exist on webroot path)

In order to test the ServerSignature changes from command line use a utility such as wget, telnet or curl as in the below examples: 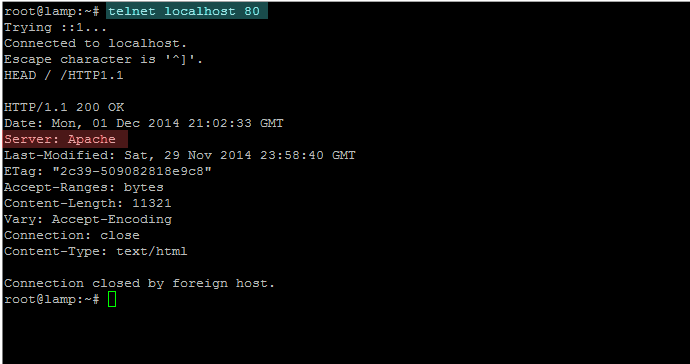 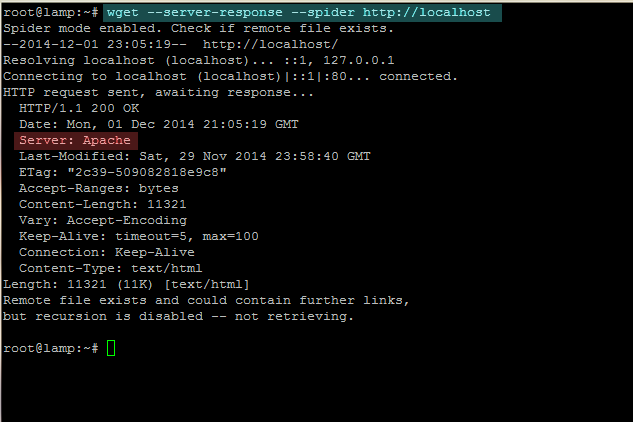 Autoindex is an Apache module which automatically generates and outputs a web directory listing, similar to ls command, when no index files are provided. 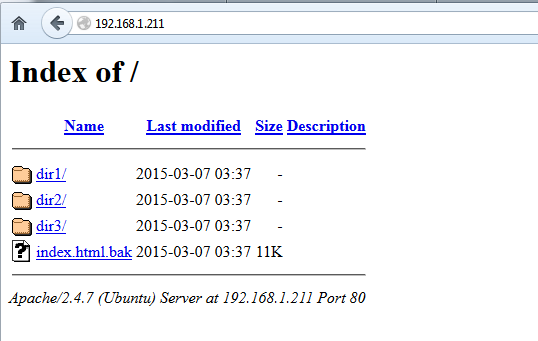 To disable Apache autoindex module on Debian based distributions issue the following commands on your server console.

To test the changes refresh the webpage and a Not Found message error should be displayed on your browser as in the below screenshot.

In order to turn off CGI scripts, Follow Symlink and Server-Side Includes for a specific directory add the following Options directives as presented below:

This can be more evaluated as a trick than a security tip. First create and .htaccess file on your webroot and add the below directive in order to change Apache default index file to a arbitrary index file (here I have used script.cgi file as an index file for ubuntu.lan Virtual Host which will be automatically served).

After you have created the .htaccess file on your Virtual Host DocumentRoot, open the Virtual Host configuration file for editing, add the below statements and restart Apache server to apply changes. The Require all granted instruction is only necessary when the Directory path is changed to a different location than /var/www/.

To disable .htaccess file just change the AllowOverride directive from All to None.

To redirect HTTP non-secure requests to HTTPS for a specific domain name, enable the rewrite module and add the following statements on non-SSL Virtual Host configuration file. For on-fly activation (without server restart) you can add the statements to .htaccess file at your domain webroot with the condition that the .htaacess file must be activated.

or replace the above RewriteRule with the one below:

Enable rewrite module and restart Apache to apply changes in case you are not using an activated .htaccess file:

Access Control are a set of rules which can limit access to a specific Apache resource. In order to completely block access to an Apache Vhost webroot add the following statements on your Virtual Host configuration file:

To allow just visitors from a specific IP Address or Network or domain use the following syntax:

This set of rules can also be applied on-fly to an .htaccess file.

Another simple but effective security measure that you can take into consideration is to protect web documents by changing file permissions. Suppose you want to protect a HTML page hosted on Apache DocumentRoot issue the following command against that file:

More drastically, if Apache user and group www-data are the owners of that file you can use the following command to completely deny access:

To protect a web document from being changed use the chattr Linux command and change the attribute file to immutable:

To view the files with immutable attributes and revert changes issue the following commands:

On most Debian based Linux distributions, Apache runs under www-data user. By defult, the www-data user has a valid Linux shell which points to /bin/sh. In order to block Apache user from attempting to log in into the system, change the system shell to point to nologin by issuing the following command:

This are just a couple of security and hardening tips that you should take intro consideration whenever you are using Apache in a production environment.

Run ASP.NET Apps with Apache and ModMono on Ubuntu